Recently, numerous local residents have reported sightings of a giant lion prowling the Kerrville area.  The lion reportedly arrived in our area from Wyoming last Thursday.  The 10’-7” long African lion has repeatedly been spotted on local roads and at THE COMING KING SCULPTURE PRAYER GARDEN, located on a 1,930 hill above Kerrville. The massive male lion is being called the “LION OF JUDAH”.

The 1,034 lb. life-size (105%) lion is a monumental bronze sculpture created by 65-year-old, internationally collected Kerrville artist/evangelist, Max Greiner, Jr.  The $80,000 sculpture, which will be exhibited across America and the world, currently stands atop a custom trailer that was designed by Greiner for mobile evangelism.  Local welder and pastor, Earnest Taylor built the special 12’ trailer.  TNJ ENGRAVING of Kerrville created the attractive trailer side panels, which feature eight evangelistic Bible verses, and Revelation 5:5, about the Lion of the Tribe of Judah.

On Wednesday, 10/18/17, the massive lion sculpture was seen by an estimated 10,000 people at the BILLY GRAHAM EVANGELISTIC ASSOCIATION event held in Waco, TX, at BAYLOR UNIVERSITY.  This was the first public unveiling of Greiner’s latest monumental sculpture. The “DECISION TEXAS” event was hosted by Franklin Graham, son of Billy Graham. Greiner was one of only about 15 people who were invited to meet privately before the event with the world-famous evangelist.

However, the majestic lion sculpture will be temporarily displayed at THE COMING KING SCULPTURE PRAYER GARDEN in Kerrville, when the artist is not traveling with the sculpture on his open trailer across America.

Greiner has an Architecture degree from TEXAS A&M UNIVERSITY and is the founder of THE COMING KING FOUNDATION, with his wife, Sherry.  The Greiners believe that God called them on December 9, 2001, to build a beautiful Sculpture Prayer Gardens around the world, to honor God and bless people.  Today, the first prototype garden is Kerrville’s most popular tourist attraction.  It has already drawn hundreds of thousands of visitors from all 50 states and at least 67 nations, since opening in 2010. 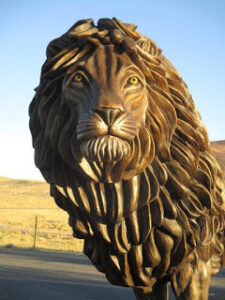 Amazing true testimonies from the garden can be heard each weekend across almost 1/3 of Texas on “THE CROSS AT KERRVILLE”, radio show. The 30-minute program is broadcast from Austin, San Antonio and Marble Falls. The unusual radio show is also available internationally on the internet at: www.thecomingkingfoundation.org

Originally, Greiner sculpted the giant lion out of foam and clay at his studio ranch, south of Kerrville.  The delicate clay carving was then cast in bronze at EAGLE BRONZE, in Lander, WY.  The foundry is one of the top art foundries in the world.  EAGLE BRONZE cast the famous Wall St. bull in New York City, the 36’ tall monumental conquistador at the El Paso Airport, which is the largest equestrian sculpture in the world.  They also cast the world’s largest continuous bronze sculpture, which is a giant herd of Longhorn cattle located in front of the Dallas Convention Center.  And, EAGLE BRONZE created all of Greiner’s monumental sculptures, including 77’7”, Cor-ten Steel sculpture, “THE EMPTY CROSS”, which sits atop the 1,930 hill overlooking the City of Kerrville.

This symbolic, $2,000,000 cross landmark was donated to THE COMING KING SCULPTURE PRAYER GARDEN by the Greiners, and Monte and Beverly Paddleford, owners of EAGLE BRONZE.  The Christian foundry owners also donated Beverly’s two sculptures: “HOPE” and “MARY, MOTHER OF JESUS”.

The 24.5 acre, world-class tourist attraction is located at the main entrance of Kerrville. It is the only place in the world where all of Greiner’s monumental sculptures can be viewed.  The spiritual art garden drew 105,250 guests in 2016 and has already passed 100,000 visitors for 2017. The spiritual garden has already passed 100,000 visitors for 2017. The free art park is open 365 days a year, from 7:00 AM until midnight.

The Greiners will be donating the “LION OF JUDAH” life-size bronze sculpture to the Kerrville garden once the funds have been raised to build a massive TEN COMMANDMENTS base and beautiful patio area needed at the top of the hill.  Tax deductible donations to TCKF are needed to bring the “LION OF JUDAH” permanently to the Christian art garden.

In the spring of 1978, Max and his wife, Sherry left the security of real jobs and started their art business on a 116 farm near the small town Woodville, TX.  In July of 1981, the Greiners moved to an earth sheltered, passive solar (Green) home/studio, which Max designed for their 126 acre ranch in the Texas Hill Country. The couple now resides in solitude near the town of Kerrville, TX.

ABOUT THE COMING KING SCULPTURE PRAYER GARDEN: On May 6, 2004, Max and Sherry Greiner founded THE COMING KING FOUNDATION, as a 501c3 art museum for the purpose of building free Sculpture Prayer Gardens across the USA and world, based on the vision given to Max by God.  The first prototype garden has been built on 24.5 acres, on IH-10 in Kerrville, the artist’s hometown.  The free, spiritual art park draws over one hundred thousand visitors a year to the 1,930’ hilltop in the Texas Hill Country. Thousands of visitors claim to have experienced the presence and power of God on this holy hill.

The Texas art garden is the only place in the world where the 77’7” contemporary sculpture called “The Empty Cross” TM can be seen.  Many people believe this artwork is the “Most Symbolic Cross Sculpture in the World”.  Many other Greiner monumental sculptures have been donated by Max and Sherry, for the glory of God and the enjoyment of visitors. Two other professional artists, Beverly Paddleford of Wyoming, and David Broussard of Texas have donated their own monumental Christian sculptures to the non-profit garden.  The Garden Tabernacle features a “Path To Heaven”, with 16” Scripture Tiles that present 77 Bible verses, in multiple languages. The free spiritual park is open from 7:00 AM until midnight, 365 days a year. Tax-deductible donations are appreciated, since the non-profit project is being built on faith in God, without debt.

More information on the garden: www.thecomingkingfoundation.org (830) 928 7774 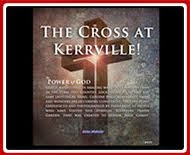 Visit The Pave the Way to the Cross Website 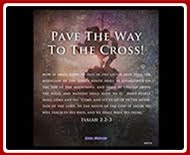 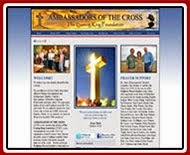 TCKF is a non-profit 501(c)3 Foundation established on May 6, 2004 to create beautiful Sculpture Prayer Gardens across the United States and other countries, for the purpose of bringing honor and souls to Jesus Christ.

“Sherry and I invite you to join with our family, the Board of Trustees of The Coming King Foundation and many other Christians to support a totally unique evangelistic outreach. We believe it will be used by God for His glory, to bring millions of people to Jesus Christ.Please take a moment now to pray and ask God if he wants you to be involved in someway, in the creation of these Sculpture Prayer Gardens around the world, so others may know our Lord and Savior. Your prayerful consideration is sincerely appreciated. May the Holy Spirit of God touch your heart and reveal His will for you, as you review this unique “vision”.

In the King’s service,