Forgiveness is key to understanding God’s will here on earth 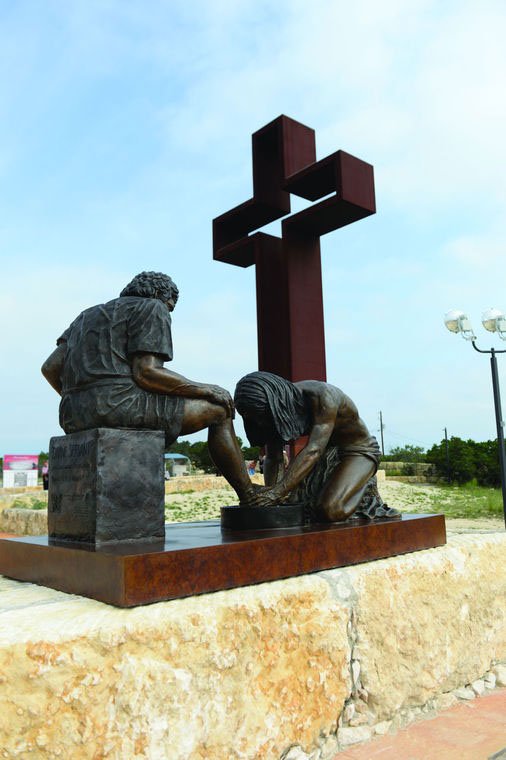 "Divine Servant" is the first Christian bronze sculpture by Max Greiner, Jr., founder of the Coming King Foundation. The sculpture, one of seven Christ-honoring works of art at the Sculpture Prayer Garden, depicts Jesus Christ washing the feet of Simon Peter on the night before the crucifixion.

If you forgive those who sin against you, your heavenly Father will forgive you. But if you refuse to forgive others, you Father will not forgive your sins. — Matthew 6:14-15

Earlier this week, in the dark of night, someone broke into two collection boxes at the Coming King Sculpture Prayer Gardens, a site designed to inspire kindness, embrace faith and instill a sense of hope. The culprit most likely believed they would find monetary treasure. Instead, they found prayer requests sprinkled with a few coins and dollars in thanks.

Whoever did the deed did so in the shadow of a 77-foot, 7-inch steel cross, the centerpiece of the art garden that boasts seven monumental sculptures that point to God.

To those who visit the site for spiritual guidance and enrichment — as well as those who simply visit to admire the more than $3 million in artworks — it was a crime of unthinkable betrayal.

“I don’t know how someone could find it in their heart — however blackened it must be — to steal from the cross,” said Linda Morris, who recently visited the site. “I have left prayer requests there myself, even a few dollars, but it’s not the money that bothers me: It’s the fact that anyone would be so callous and heartless to even target the site. What’s wrong with people? It’s like stealing from a collection plate.”

Morris said she’s praying for the person or persons to be caught, not because she wants retribution, but because whoever did it needs to be held accountable, before he or she steals from someone else.

“If they could do this, they’ll do it again someplace else,” she said. “I mean, they had a crowbar or something to break in, right? What if someone had been up there and saw them? Who knows what would have happened. These people clearly have no moral compass.”

Police are reviewing video footage downloaded from the cameras at the site, but Max Greiner Jr., president of the Coming King Foundation that owns the cross and 24.5-acre sculpture garden at 520 Benson Drive, said he and his wife, Sherry, have already forgiven the perpetrators.

“Scripture tells us that we must forgive all who have harmed us or others. First, this is a matter of obedience for Christians: Either we obey Christ’s commanded to forgive and love our enemies, or we disobey Him,” Greiner said. “Second, we forgive all who have harmed us and others, so we may be forgiven and healed. Jesus forgave us of all of our sins, so He asks us to extend our forgiveness to others. Third, we must forgive others so we may be healed, psychologically and physically.”

Refusing to forgive, he said, “destroys our minds and bodies. Someone once said not forgiving others is like drinking poison and hoping the other person will die.”

Others are no so forgiving.

“I know in my heart that I should forgive this cowardly thief, because I’m a Christian, and I’ll work on that. But this person stole prayers. Prayers,” said Doug Miller, a visitor at The Empty Cross. “Who does that? I’m praying they get caught, and I’m praying they get shamed by the court and by the people they meet in jail. If they want forgiveness, they can ask God for it themselves.”

The Rev. Stockton Williams said every day people experience some form of offense from others, and it is natural to become upset and have a desire to lash back in retaliation. But there is a powerful reason for us to not only refrain from reacting negatively, but also to completely let go of those hurt feelings

“My family, and, particularly, my wife’s family, have had a rough, first-hand experience of this when her aunt, uncle, and cousin — Julianna and Clayton Kenney and Adrian Arnot — were murdered here in Kerrville,” said Williams, rector of St. Peter’s. “The murders began a long process of forgiveness that took some 10 years of effort, prayer and God’s healing help. Forgiveness of a major hurt usually does not happen in an instant.”

As hard as it was to let go of the anger and the bitterness, Williams said, “they were able to express this forgiveness to one of the murderers before he died, and that process in itself was very healing, because he wrote out a statement of sorrow and repentance that I assume helped him, and I know helped us.”

People often mistake the true purpose of forgiveness, Williams said. We assume it is for those who we forgive, but the greatest benefactor is actually ourselves, he said.

“My grandmother used to always say, ‘Hatred does more harm to the vessel in which it is stored than to the object on which it is poured.’”

So, yes, it is important to forgive, Williams said, “so that we can move on and so the hurt does not have great power over us. Of course, there is always a scar, but we can eventually push through and triumph over it with God’s healing and help.”

Pastor John Wheat, senior pastor at Trinity Baptist Church, said forgiveness is a conscious decision to accept God’s grace to let go of the hurt due to sins committed against us and to express this by acts of mercy and love toward the offender.

“If we don’t forgive, it doesn’t affect the person who has wronged us,” Wheat said. “We’re the ones who are embittered, and we carry that with us.”

When we are wronged and we are willing and able to let go of that hurt, this is the kind of energy we draw into our lives — the energy of forgiveness. As a result, any negativity that is meant to return into our lives will be held back, and we will be protected, Wheat said.

“We need to be willing to forgive, even before the person asks for it. That’s the grace that God holds out for us, and that’s what we should try to do as His children.”

David Danielson, president of the Kerrville Ministerial Alliance and pastor at Impact Christian Fellowship, said forgiveness is always a choice of the will.

“Very rarely do our emotions feel like forgiving, when we are wronged or an injustice has occurred,” Danielson said. “God changes our heart as we make the choice to forgive.”Being willing to forgive does not justify, condone, rationalize or excuse what was done, he said. “Instead, forgiveness cancels the debt and prevents us from getting imprisoned by what was done to us. Failure to forgive actually has the real potential to keep us re-living the event within ourselves — and that causes both short-term and long-term issues.”

“For Christian believers, we are commanded and enabled to forgive, because God first forgave us,” Tear said. “No matter how badly someone has sinned against us, it is nothing compared to how seriously we have offended against God. God made a conscious and deliberate choice to open the way of forgiveness for us through Jesus’ death on the cross.”

Tear said another good reason to forgive is because when we do “we are released from the burden of carrying a grudge, and that is no small thing. Jesus talks about those who refuse to forgive being turned over to torturers. He does not mean little demons with pitchforks,” Tear said. “People who carry grudges tend to have high levels of stress hormones overcharging their systems. It is well known that continuously high levels of those hormones cause many sorts of psychological and physical problems. Human beings are not created to live that way.”

Morris admitted said she’s struggling with forgiving those who committed the crime. She said she can only hope that when the perpetrators reached into the boxes “and grabbed what they thought was money” they had a sharp pang of regret and remorse when they realized what they actually had stolen were requests for healing and guidance.

“I hope they felt terrible. I hope they felt shame, but I’ll bet they just threw them out the car window like trash,” Morris said. “Those are prayers that won’t be prayed over, and that’s just terrible. I’d like to believe people are better than that, and I guess I have to have faith that they will regret what they did, and not just because they get caught. And they will get caught.”

Wheat said Morris need not worry that the prayers won’t be heard — because they already were.

“The sad part is that we think, oh, wow, someone had a prayer request that no one’s going to get and read and pray over, but the truth of the matter is that God knew who wrote those prayer requests,” Wheat said. “They gave that request straight to God.”